Ben Sun is co-founder and general partner at Primary Venture Partners, a seed-stage VC firm based in NYC.

A month ago, Coupang arrived on Wall Street with a bang. The South Korean e-commerce giant — buoyed by $12 billion in 2020 revenue — raised $4.55 billion in its IPO and hit a valuation as high as $109 billion. It is the biggest U.S. IPO of the year so far, and the largest from an Asian company since Alibaba’s.

But long before founder Bom Kim rang the bell, I knew him as a fellow founder on the hunt for a good idea. We stayed in touch as he formed his vision for what would become Coupang, and I built it alongside him as an investor and board member.

As a board member, I’ve observed a brief quiet period following the IPO. But now I want to share how exactly our paths intersected, largely because Bom exemplifies what founders should aspire to and should seek: big risks, dogged determination, and obsessive responsiveness to the market.

Bom fearlessly turned down an acquisition offer from then-market-leader Groupon, ferociously learned what he didn’t know, made a daring pivot even after becoming a billion-dollar company, and iteratively built a vision for end-to-end market dominance.

In 2008, I met Bom while playing a weekend game of pickup basketball at Stuyvesant High School. We realized we had a mutual acquaintance through my recently-sold startup, Community Connect Inc. He told me about the magazine he had sold and his search for a next move. So we agreed to meet up for lunch and go over some of his ideas.

To be honest, I don’t remember any of those early ideas, probably because they weren’t very good. But I really liked Bom. Even as I was crapping on his ideas, I could tell he was sharp from how he processed my feedback. It was obvious he was super smart and definitely worth keeping in touch with, which we continued to do even after he relocated to go to HBS.

I soon began investing in and incubating businesses, starting mostly with my own capital. When I got a call from an executive recruiter working for a company in Chicago called Groupon — who told me they were at a $50 million run rate in only a few months — I became fascinated with their model and started talking to some of the investors, former employees, and merchants.

Inspired, and as a new parent, I decided to launch a similar daily-deal business for families: Instead of skydiving and go-kart racing, we offered deals on kids’ music classes and birthday party venues. While I was working on this idea, John Ason, an angel investor in Diapers.com, said I should meet with the founder and CEO Marc Lore. By the end of the meeting, Marc and I etched a partnership to launch DoodleDeals.com co-branded with Diapers.com. The first deal did over $70,000 — great start.

I’ve observed a brief quiet period following the IPO. But now I want to share how exactly our paths intersected, largely because Bom exemplifies what founders should aspire to and should seek: big risks, dogged determination, and obsessive responsiveness to the market.

All that time, I kept in touch with Bom. In February 2010, we were catching up over lunch at the Union Square Ippudo, and he asked if I had heard of Buywithme, a Boston-based Groupon clone. He hadn’t yet heard about Groupon, so I explained the business model and shared the numbers. He thought something similar might transfer well to South Korea, where he was born and his parents still lived.

This kind of conversation is exactly why I love working with founders early, even before the idea forms: You learn a lot about them as they explore, wrestle with uncertainty, and eventually build conviction on a business they plan to spend the next decade-plus building. Ultimately, success comes down to founders’ belief in themselves; when you develop the same belief in them as an investor, it is pretty magical. I was starting to really believe in Bom.

The idea gets real — and moves fast 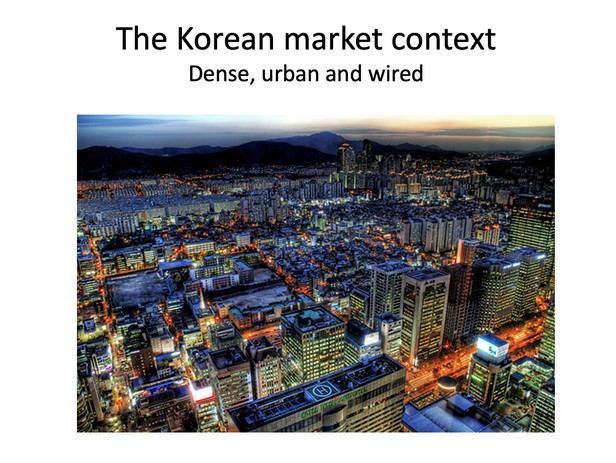 I’m not Korean — I am ethnically Chinese — so Bom put together slides on the Korean market and why it was perfect for the daily-deal model. In short: a very dense population that’s incredibly online. Image Credits: Ben Sun

I told Bom he should drop out of business school and do this. He said, “You don’t think I can wait until I graduate?” I responded, “No way! It will be over by then!”

First-mover advantage is real in a business like this, and it didn’t take Bom long to see that. He raised a small $1.3 million seed round. I invested, joined the board. Because of my knowledge of the deals market and my entrepreneurial experience, Bom asked me to get hands-on in Korea — not at all typical for an investor or even a board member, but I think of myself as a builder and not just a backer, and this is how I wanted to operate as an investor.

Once he realized time was of the essence, Bom was heads down. For context, he was engaged to his longtime girlfriend, Nancy, who also went to Harvard undergrad and was a successful lawyer. Imagine telling your fiancée, “Honey, I am dropping out of business school, moving to Korea to start a company. I will be back for the wedding. Not sure if I will ever be coming back to the U.S.”

I emailed Bom, saying: “Bom — honestly as a friend. Enjoy your wedding. It is a real blessing that your fiancée is being so supportive of you doing this. Launching a site a few weeks before the wedding is going to be way too distracting and she won’t feel like your heart is in it. Launching a few weeks later is not going to make or break this business. Trust me.”

Bom didn’t listen. He launched Coupang in August 2010, two weeks before the wedding. He flew back to Boston, got married, and — running on basically no sleep — sneaked out for a 20-minute nap in the middle of his reception. Right after the wedding, he flew back to Seoul. Nancy has to be one of the most supportive and understanding partners I have ever seen. They are now married and have two kids.

Jumping on new distribution, turning down an acquisition offer